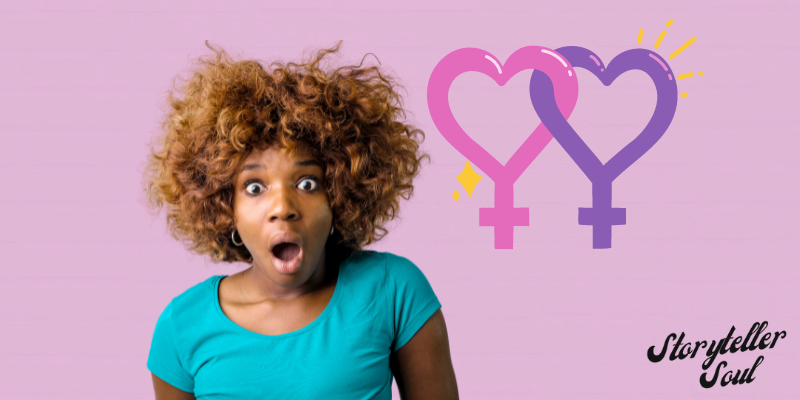 It’s time for another Ask Queer Abby, where you submit your questions about any and all things LGBTQIA+ and I offer my perspective with the goal of building bridges and not burning them to a flaming crisp.

The following question has been condensed from the person’s original message and shared with their permission.

Mayday! Life is not Gay-Okay!

I have to tell you, you might be saving me.

I'm the cliché.  Married, two kids, almost 40.  And I went from always knowing I was bi, but not ever wanting to date women, to now, where men don't do anything for me anymore.  Why now? Why this late? How the hell do I tell my husband?!

I'm not worried about my friends, they will be great.  Except the one girlfriend I mentioned this to and she told me it was a phase.  But I don't think it is.

Hey Dani! Thanks for reaching out. First, let me start by saying that I love that we have become “cliché” in a way. My story is a very similar parallel: I considered myself bi for a long time (though already in a committed relationship with a man), two kids, and realized I was a lesbian at 38 years old. And then I let out the rally cry of our people, “Holy shit! Why Now? Why Is This Happening!!!”

Fortunately for you, I’ve spent approximately 2.5 years perseverating over this very question. I have a few theories behind the why and also some potential solutions for you that I’ve collected from fellow late-to-LGBTQ+ folx. So, let’s dive into a few reasons why women our age are having this sort of sexual awakening.

1) Compulsory Heterosexuality (comphet) and changing societal norms. If you’re not familiar with it, comphet is the assumption that everyone is straight. You may have been raised this way. I was definitely raised this way. Heck, I was even subjecting my kids to some comphet language even after I came out… not realizing that even though I was gay, I (and everyone around me) still assumed that my kids were straight.

As much as I’d like to pretend comphet couldn’t have that much of a stronghold over my identity, in hindsight I’ve realized that it was a major factor. With comphet comes internalized homophobia. There comes a ranking of relationships and which ones are better or more desirable. Because of comphet, I subconsciously viewed same-sex relationships as something “less than” or “different.”

Lastly, it’s a great time to be queer in the US and many other parts of the world. Perceptions are rapidly changing. It became easier for me to even visualize having a relationship with a woman when I realized that we could legally marry in 2015. My own government no longer classified my relationship as something less valid, and so to my perfectionist self, it was a big step in realizing that my attraction was okay. Even in just the past two years, the amount of allyship from businesses and individuals has grown. Pride month is a huge celebration in many parts of the US.

Never hath there been more rainbows crammed down individuals’ throats since Lucky Charms revealed their jumbo-sized box. And I am here for it!

2) Sexuality is fluid. I’m sure you’ve probably heard this before, as more people begin to acknowledge gender and sexuality as a spectrum rather than a binary. And science supports this. It’s not just because we all read Untamed and became wild cheetahs.

A 2013 study in Psychology and Sexuality found that 64% of women surveyed experienced sexual fluidity, meaning their attraction changed. The survey also found that while “sexually fluid men identified as completely homosexual/gay,” women had a wider range of sexual identities.

Sexual fluidity is part of the human experience and something we’re finally able to acknowledge nowadays.  At least we’re in good company.

So Now What Do We Do

This part is more difficult. The good news is that we have the experiences of many couples navigating this same situation and there are so many options.

Platonic Relationship. Some folx are okay with the thought of a sexless marriage. Heck, a lot of couples that have been together for decades experience this anyway, even when they are attracted to each other. I had several family members pressuring me for this option, pointing out how many couples I knew who slept in separate beds. Trust me, the thought of keeping everything in my life the same and just removing the pressure of sex was enticing. I really loved our life in every other aspect and so do other couples in this same situation.

For me, though, I realized two things:

1) I didn’t want to have a life void of physical intimacy. Touch is such an important part of the human experience. The thought of lying on my deathbed having never had an intimate experience with a woman haunted me.

Ethical Non-Monogamous Relationships. ENM relationships seem to be blowing up in popularity as all types of couples and sexuality identities realize that they can live their lives, have their relationships, and also not deny themselves the type of connection they seek. Janet Hardy’s book, The Ethical Slut, is widely praised as one of the best books on the subject. Ethical non-monogamy requires boundaries and structure to make it work successfully and many people have found their happy place in this type of open relationship.

One note on this. ENM is different from “unicorn hunting” or adding a woman to your sexual relationship with your husband. It’s hard to find women that are interested in taking on this role and are attracted to both you and your partner. Plus, this situation (for most) means that you maintain your sexual intimacy with your current partner, plus the new person, all at once. For some people this works. Most stories I’ve heard, however, result in the women falling for each other and then feelings get hurt and a messy divorce ensues.

Divorce and Start Over. My (now ex) husband and I wanted to make it work. He is an incredible guy. We had a great relationship and friendship (aside from the obvious issue). We really explored every option as to how we could stay together without forcing me to have to deny my identity any longer. When we realized that couldn’t be the case, we concluded that our next best option was to move on and do everything we could to preserve our friendship so that we could successfully co-parent our children. It was risky. It was scary. We didn’t know if either of us would ever find another person. The thought that one or both of us would give up our comfortable marriage to live alone for the rest of our lives was terrifying.

But guess what? We both found love again. He realized what he was missing once he was in a relationship with a straight woman. And I am so grateful for the opportunity to experience love with my partner as I have always wanted to and tried to my entire life.

There are some things I need you to know:

Lean into the queer community when you need support or have questions. There are fabulous Facebook groups like Kari DeWitt’s “Late Bloomer Lesbians+”, Robin Douglass’ “Coming Out Late”, and Franco Stephens’ “The Curve Community” that are such wonderful forums to connect with others that have or are going through the same thing.

The road ahead may be challenging, but there is no better gift that you can give yourself (and teach your children) than living with integrity in your truth. Sending you a ginormous hug. We’re here for you in whatever you decide.

P.S. If your friend who thinks this is a phase has any questions, send her my way. I have a few thoughts on that.

Hey reader! Have you experienced the same? Share your thoughts with Dani in the comments below.

If you have a question for Queer Abby, please email it to Jill@JillWritesWords.com and I will happily feature it in a future post. Thank you for being a part of these important conversations.

8 thoughts on “Ask Queer Abby: Why Am I a Lesbian Now?”

We use cookies to ensure that we give you the best experience on our website. If you continue to use this site we will assume that you are happy with it.Ok