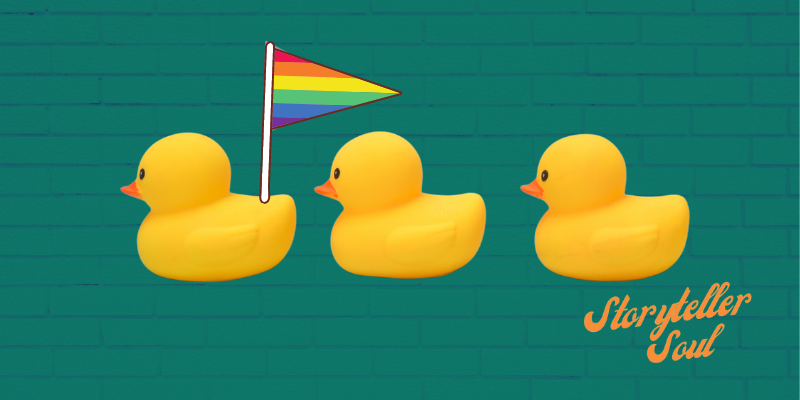 He couldn’t have been more than 13 years old, walking away from the hotel pool with someone who appeared to be his older teenage sister.

“No it’s not,” she shot back, not taking even a second to look up from her phone.

They were talking about us. I prayed that my partner Jen, whose strong and soft hand was intertwined with mine, wouldn’t hear them and have the smile wiped from her face. I wasn’t sure why his comment cut so deep, but I had my suspicions. Perhaps it was because kids always seemed like our safe place. With nearly 1 in 5 youth identifying as LGBTQ+, it has always felt like this generation could finally see us through the lens of being just another relationship. My own children were unphased when I announced to them two years ago that their mom was a lesbian. They had been raised with other gay and lesbian couples in their lives, so at 6 and 9 years old, the thought of their mom also being part of that group didn’t seem to matter.

Perhaps his comment stung more because it happened to be on National Coming Out Day, October 11th, a day that started as a civil rights movement to put an end to homophobia. I always hold my breath a bit on this day, feeling the emotions of my community and the many members that are coming out for the first time, knowing that the chances are good they’ll receive a lot of support… but are also almost guaranteed to also receive some hate. It’s like a mom sending their child off to kindergarten for the first time, with a mix of excitement and pride for this new phase of their life combined with the fear that some other kid is going to be a jerk and make them cry.

Perhaps his comments just hurt because I was tired. Not tired in the physically overworked and overplayed sense, but just tired of the new sense of hypervigilance that seems to come along with being LGBTQ+. Sometimes I call it “all-eyes fatigue”, like when Jen and I would go to a restaurant or airport or just walk through my neighborhood and I would become aware of the number of people staring at us. She didn’t notice. Maybe it’s because she’s always been out and was used to being stared at in her relationships with other women. I, on the other hand, had my nearly 20-year relationship with a man to compare it with. In a straight relationship, people looked at us but never stared at us. There is a palpable energetic difference there that I find exhausting.

Being a “late-in-life” gay after coming out around age 40, has offered me a unique perspective on what the queer community goes through. This perspective becomes even more interesting when compared against that of my partner, who has only been in same-sex relationships since her teen years. She sees life as being so much better, so much more accepting. I see life as, “Holy shit! This amount of homophobia still exists?!”

What saddens me even more is that Jen and I are both middle-aged, straight-passing, middle-class white women in the United States. We bear the brunt of homophobia the least, as compared to our BIPOC, trans, genderqueer, and many international community members. Our risk of being assaulted or murdered for who we are and who we love is significantly less than what others face. We also have the luxury of being independent adults who can afford our own homes as a “safe space” and regular therapy to help navigate this life. And still, it’s hard.

So today, I thought I’d highlight some of the micro-differences I’ve found in my own life from the perspective of someone who spent almost half their life in a heterosexual relationship and is now in a same-sex relationship. For those of you who have become accustomed to my light tone and the quirky humor of my other blogs, I’m going to apologize in advance. It’s hard for this one not to feel heavy to me. But my hope is that this story reaches as many allies as possible so that they can understand more of what the queer community faces, and that it reaches as many LGBTQ+ folks as possible to know that they’re not alone in what they’re feeling.

One peck from a duck will not kill you. It might not even hurt. But prolonged daily pecking takes its toll. And sadly for some, the accumulation of those small micro-hurts becomes too much. Here are a few of the pecks I’ve faced becoming part of the LGBTQ+ community.

I know. I’ve heard it before. “Stop whining, Jill.” “It’s not that bad.” “You go looking for trouble.” And you know what? They’re right in a way. For me, it’s not that bad. I still go about my daily life and most of the time things are absolutely fine.

But I also come from the privileged place of knowing what it’s like to live in today’s world in both a heterosexual and homosexual relationship. In my hetero life, my same-sex couple friends rarely, if ever, shared the ways they were often hurt. Because many of them had been out for over a decade or more, they were used to hiding themselves and their relationships for their own safety. I believe it’s the reason that some of them are far less vocal than this new, loudly-crying army of baby gays that have come on to the scene in the past two years or so. We now see these injustices first-hand and we are not okay with it.

And I’d be remiss if I didn’t mention that the above comments are just the duck-covered tip of the iceberg. 2021 is one of the worst years in recent history for anti-LGBTQ legislation in the US. 2020 was the most violent year on record for trans and gender non-conforming people in the US according to the HRC. It’s been 23 years since Matthew Shepard was beaten and left for dead in Wyoming and yet the “LGBTQ+ panic” or “gay/trans panic” defense is still allowable in court in 38 US states. A 2017 study found that LGBTQ+ people are four times as likely to be a victim of violent crime than non-LGBTQ+ people.

So... maybe can we stop telling members of the LGBTQ+ community or their allies that "it's not that bad" when they share the things they say hurt them?

All You Need is Love

I didn’t feel like I could speak out and stand up for the LGBTQ+ community before I came out. I had too much fear that if I, as a straight-appearing person, supported the gays, people would assume that I was gay too. I had a lot of internalized homophobia. I still see this now in people, sometimes as support for my work that comes through in heartfelt private messages from individuals expressing their discomfort that showing public support might make people assume things about them personally. People are still scared to be LGBTQ+ or have people think they might possibly be LGBTQ+ when they’re not.

I have a responsibility now to stand up for myself, my partner, my community, and future generations. When we are willing to learn, we can love better. When we have these conversations, we can become stronger allies and supporters. When we give grace to each other to make mistakes, to misspeak but with a commitment to grow, the world becomes more tolerant. At least, I ducking hope so!