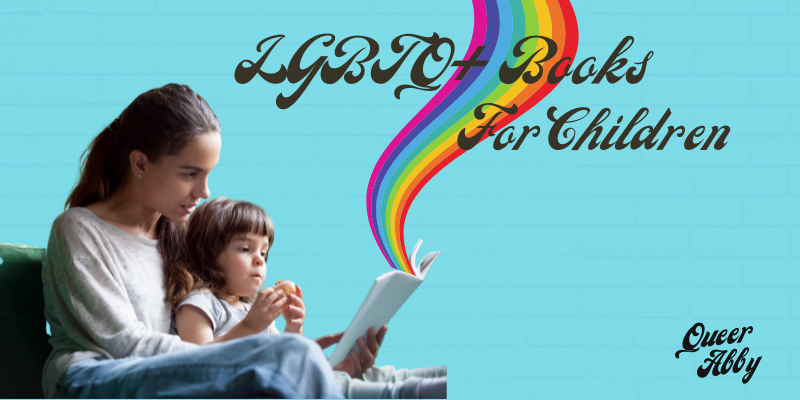 Florida passed the “Don’t Say Gay Bill” yesterday and I felt my heart clench and lungs deflated like a balloon. Maybe it’s because it’s the first time I’ve been legislated against as an out queer person and WOW is it scary. Maybe it’s because I have a son in 3rd grade. You know, the age where it’s still “age inappropriate” for him to know that our family exists. But I think the biggest thing that hurts is how many people I know that support this bill because of the way that it was explained to them. We have so many people scared of the boogieman that is LGBTQ+ because they have no idea what being LGBTQ+ is like. Shame. Maybe some education would have helped that.

The Importance of LGBTQ+ Education

I got a note recently from a dear friend of mine the other day asking for recommendations on LGBTQ+ books for kids. The purpose was not because her kids were questioning themselves, nor because they had anyone recently in their family or friend circle that came out. She realized a need for the books when she mentioned to her 5- and 7-year-old that some families have two moms and “their heads about exploded.” It was something that was not even in their realm of awareness at the time. (I know that feeling).

So, in an effort to protect young craniums, I’ve compiled a list of children’s books that show just how normal LGBTQ families are and how easy it is to let children know that LGBTQ people exist. And rest assured, just as we can let children know that nurses, and axolotls, and Hindu people exist without believing that our children will automatically turn into a nurse, axolotl, or Hindu because of such learning, children can also learn about the LGBTQ+ without it changing their natural attraction or gender identity. (But if your child becomes a lesbian nurse in an axolotl costume who celebrates Holi, that is incredibly okay too!)

The Spectrum of LGBTQ+ Books

Just as sexuality and gender expression exists on a spectrum, so do the books that go along with them. Cool, eh?! There are books like Rainbow Revolutionaries: Fifty LGBTQ+ People Who Made History by Sara Prager, which are very clearly, 100% queer content. And then there are books like What Makes a Baby by Cory Silverberg that just use general and inclusive terms.

I’m fortunate that even in turn-back-time Florida, I was able to find MANY LGBTQ+ titles through my library system (you may have to request them in advance). Here are just a handful that I was able to peruse this week. My recommendation is to check them out, read them yourself, and decide if the story fits with the lessons and language you want your children to be familiar with.

What Makes a Baby by Cory Silverberg- A story of human conception that speaks in general terms of bodies that have sperm and bodies that have eggs. It also discusses the various ways babies are delivered.

The Tea Dragon Festival by Katie O’Neill- A sweet graphic novel about villagers and dragons that also touches upon gender outside of the binary through small, subtle details. On one page an uncle says, “There’s my favorite nibling” and on another page a dragon explains how they can shift from dragon to human and male to female forms. If you’re not familiar with non-binary terms, they will most likely slide right by. But if you or your children are, you’ll feel seen in this story.

Princess Princess Ever After by Katie O’Neill- A graphic novel that features two princesses and a “butthead” working together to be brave and fight evil. In the main story, the two princesses hold hands at the end. If you read the epilogue, they get married and live happily ever after. If you’re sensitive to having a discussion about name-calling with your children, this is not the book for you. But if you’re willing to dive into fatphobia, toxic masculinity, and the fact that not everyone is attracted to a different gender, you will probably enjoy this humorous tale.

I Am Jazz by Jessica Herthel & Jazz Jennings- A simple story about the true life of a transgender girl named Jazz. It includes a list of all of the things Jazz has loved and been interested, like the color pink and mermaids. Jazz describers herself by saying “I have a girl brain but a boy body.” Jazz describes how that can be confusing for people, including teachers and family members. She also discusses being teased but says at the end of the day she’s happy to be who she is.

Maiden & Princess by Daniel Haack & Isabel Galupo- For the younger crowd, this is the simple tale of a maiden who views the prince has her friend and doesn’t want to become his wife. As she cries outside of the royal ball, the prince’s sister comes out to console her. They fall in love. The family sees and supports that love, and the maiden and princess marry happily ever after.

Tale of the Shadow King by Daniel Haack- A married gay couple (knight and prince) work to fight a shadow king whose sadness spread darkness across the land. The couple holds hands and one kisses the other’s forehead. They say they love each other. The shadow king revels his sadness came from having to feel bad about who he was. They all learn to feel pride in their identities. And the final page pictures couples of all types holding hands.

Rainbow Revolutionaries: Fifty LGBTQ+ People Who Made History by Sarah Prager- written in the style of “Rebel Girls” and “Boys Who Dare,” this book covers historical figures representing each letter of the LGBTQ+ acronym. Each page features an easy-to-digest bio about the accomplishments of the person and how their identity impacted their life, along with an illustration of them. Watch my video review HERE.

My son created a book that he calls “Weird, But False.” It’s like the “Weird, But True” series except everything he includes in the book is something outlandish and preposterous that could never happen. I thought to myself, where the heck does he get this from?! And then I realized…

As I was preparing for this blog, I allowed my mind to wander into the precarious territory of imagining what government officials and voters in favor of the “Don’t Say Gay” bill must assume LGBTQ+ books are like. Naturally, my mind (instead of focusing on my grocery list) came up with a few titles that I pictured Republican Senator Dennis Baxley or Governor Ron DeSantis bravely pulling from elementary school shelves as they proudly uphold heteronormativity... 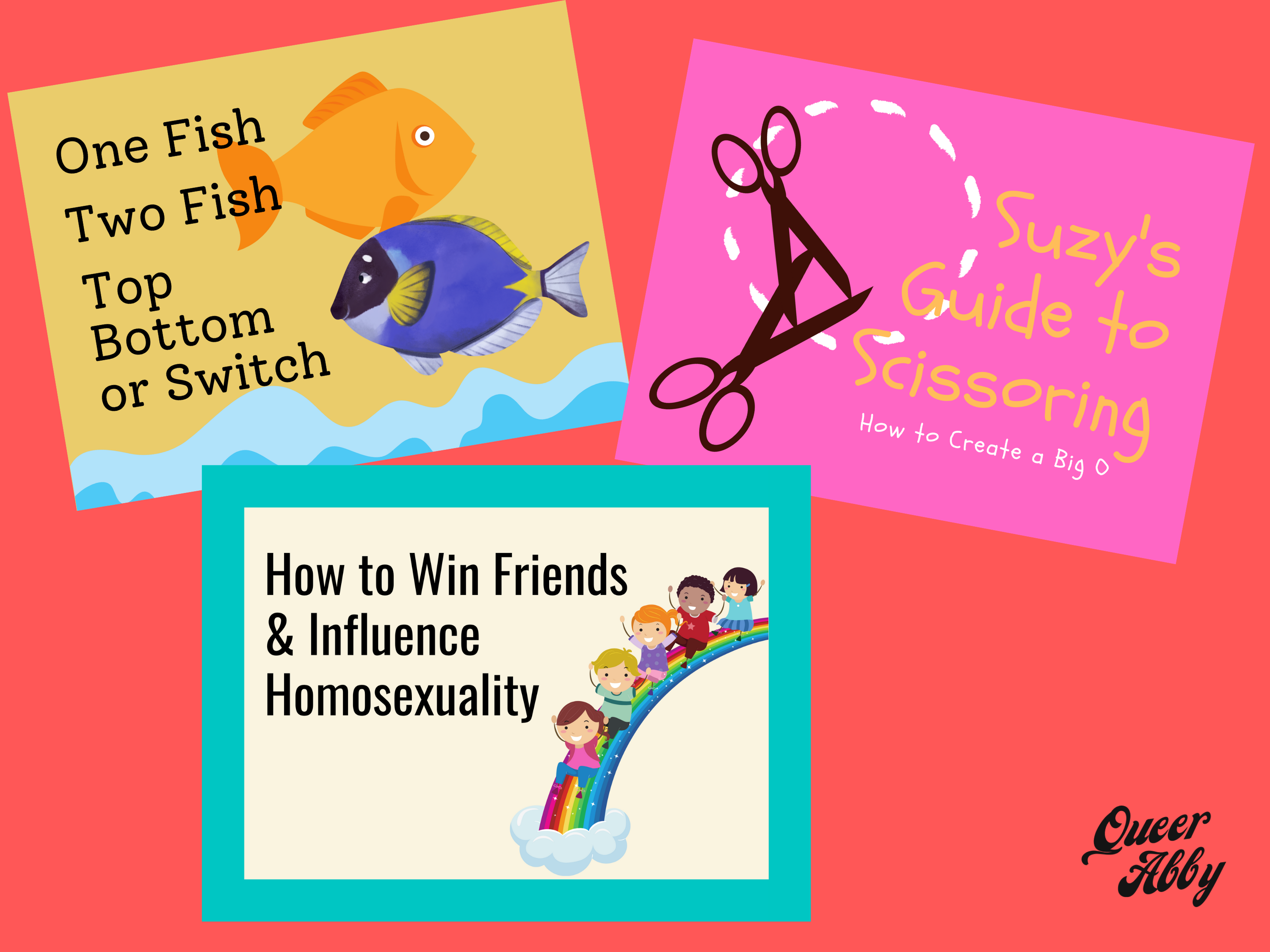 I will be overjoyed for the day when people can stop reducing the LGBTQ+ community to a sex act and can view our families as… gasp!... families. But until then, my mind just wants to keep imaging the fictitious titles that a Rambo-esque DeSantis slays one by one with his mighty Bic sword.

The More You Don’t Know

Florida’s new bill states “Classroom instruction by school personnel or third parties on sexual orientation or gender identity may not occur in kindergarten through grade three or in a manner that is not age appropriate or developmentally appropriate for students in accordance with state standards.” Proponents of it have cheered at the fact that sexual content would no longer be taught (was it ever though?!) to their younger-elementary children. Except that they may have missed a proposed amendment that showed the bill’s true colors.

Representative Carlos Smith saw the concern over sex being taught at too young of an age. I think most parents could agree that sex should not be part of the curriculum until children start to reach puberty. Rep. Smith proposed clarifying the language to say, “human sexuality” rather than “sexual orientation or gender identity.” If the issue of sexual acts is what’s bothersome, then it makes sense to restrict those discussions. His amendment was shot down.

Why? Because this was never really about discussing sex acts in kindergarten through 3rd grade. It’s about creating enough ambiguity in the law and enough fear of legal repercussion in public school teachers and administrators that any mention of the LGBTQ+ existence becomes erased in the classroom.

The true danger of this bill is the fact that it lacks specifics and has potentially heavy penalties.

But, think about it, if they DID actually make it specific and stated what was okay to cover and what wasn’t, it would show just how homophobic and transphobic the bill truly is. They’re just hoping they’ve dulled down Florida education enough that you’re not smart enough to figure that out.

I invite and welcome respectful discussion in the comments. Got a question? Email me at Jill@JillWritesWords.com and let's continue the conversation.

And if you like these posts, help a creator out and comment below, join my newsletter, share these posts, or buy from my affiliate link store and support this energetic exchange. I appreciate you!