Warning: This post is about sex. If that’s not appropriate for your age or mental state, stop reading now and go Google something like, “Cat Translators” or “Qualities of a Dictatorship” instead.

Friendly heads up: This post was sponsored by Bombex. This is not a greedy grab for fame and fortune on either behalf. This is a company I support and stand behind their mission and goals, and they see the purpose in my mission and goals as well. It’s all about sharing a good thing when you see it!

The Sex Post I Always and Never Wanted to Write

This post has been on my heart for quite some time.

And I continued to avert my gaze from it like a nun who has accidentally wandered into Boston’s Sweet N’ Nasty while asking for directions to the nearest train stop.

There is (or was) a reason that I’ve been called a prude many times throughout my life. In fact, the first time I was called a prude, I wasn’t even familiar with the word and thought they called me a prune. But those are stories for another day.

(Do you see how I’m avoiding the subject? Breathe, Queer Abby.) 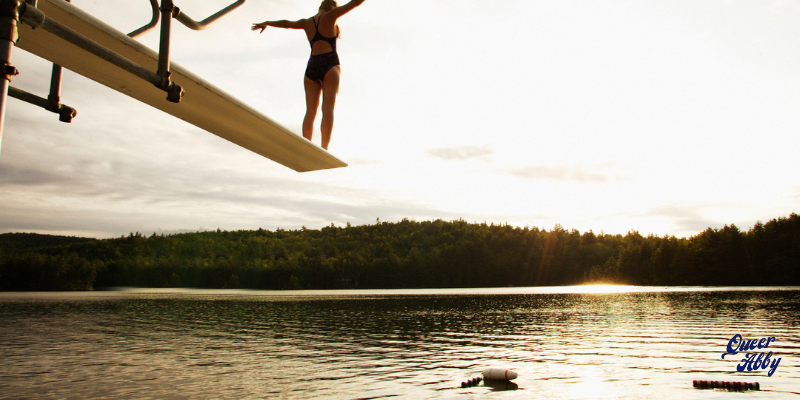 Becoming Comfortable with the S Word to Support the L Word

I want to be okay with sex. I want to be entirely and unabashedly comfortable with the subject because it’s an important topic to discuss, not only for the LGBTQ+ community but also for so many women and people in general, regardless of how they identify, who struggle with pain, fear, trauma, or discomfort in this arena of life.

Part of me was reticent to write this post because the hyper-sexualization of the LGBTQ+ community by our politicians and society is already a hot button for me. (See this TikTok to explain why “What You Do Behind Closed Doors” is not the supportive phrase some people think it is). Part of me also knows that this topic is a tree with many important branches to discuss, including the fetishization of lesbians and the violence that results from it.

There will be other blogs to discuss those topics. I promise. But not today. Today’s focus is about self-healing. And as much as I invite questions from people about what to do about things in life, this is one topic where I can’t (and shouldn’t) opine on what YOU need. I can only share my story.

Not Broken, But Things to Fix

For a long time, I thought I was broken. My body didn’t seem to do what it was “supposed” to do. This was not because of the skills of my partner at the time. This was not because I had a Netflix soft-pornish expectation of what sex was supposed to be like, either. I was just convinced that there was something physically wrong with me that made arousal difficult and orgasms nearly impossible.

Perhaps I was deficient in a necessary hormone. Perhaps it was due to nerve damage from the birth of my daughter. I went to doctors, nurses, and acupuncturists. I got bloodwork done. I hoped that someone would be able to say to me, “Yep! Here’s the problem. Just take this magic pill and all will be fixed!”

And they did try prescribing pills and tinctures, suggested getting an O-shot (and also a facelift at the same time), and recommended watching “whatever turns you on.” I didn’t go through with most recommendations. I sensed that some practitioners didn’t ACTUALLY have any idea about my issue and were just giving an answer because that’s what we always feel compelled to provide in US culture.

And also, at that point in my life I didn’t really understand “what turned me on.” That was the whole problem and why I was asking for help in the first place. My "on" button was broken.

The funny thing is, I do recall from one session wishing in my mind that the doctor would ask me if I’ve “considered my sexuality as the issue.” I consider it funny because, quite obviously, I had questions about my sexuality at that point if that’s what I was hoping they would ask me. But I hadn’t given myself permission to explore more. Somehow, I figure that if a healthcare practitioner asked me to think about it, then I would have permission to actually do so.

It’s funny how us people-pleasing perfectionist types can be our own greatest barriers to healing. While I still struggle with these tendencies, freeing myself from them enough to admit, accept, and love myself as a lesbian was a huge first step. Thanks therapy! 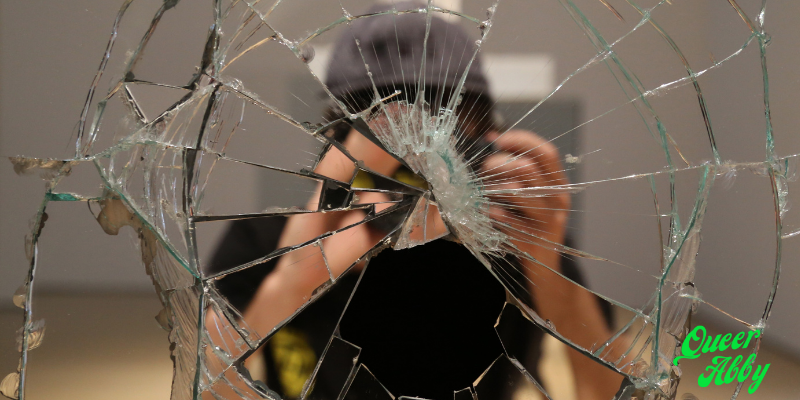 My fifth grade sex education class was a disaster. I recall the overly-gruff, approaching-retirement-age male teacher who called me “Gilligan”, putting up transparencies on an overhead projector to show us what a penis and a vagina looked like. The main takeaway was that one goes in the other and you may walk away with a disease or a baby if you’re not careful.

While I’d like to pretend that this level of sex ed was okay at that age because it took a “clinical” approach to the conversation… it wasn’t. It failed on multiple fronts, but the most obvious for me being that there was no mention of the vulva—the anatomical description for the various components of this area of the body. Equating us to “just a hole” is perhaps why so many people find understanding and exploring sexual arousal for themselves or their partners a challenge.

With the realization that I had no clue about the details of female sexual anatomy, I did what my Aries energy does with any subject in which I am not well-versed but want to be—I studied the heck out of it. I needed to know more about the physical structures and nerve patterns, what an orgasm meant and how that could vary greatly in its expression from person to person, and even how sexually transmitted diseases could be transmitted in a lesbian relationship.

While we still have a way to go when it comes to female sexual health, I am encouraged by the research, resources, and conversations that are becoming more readily available. 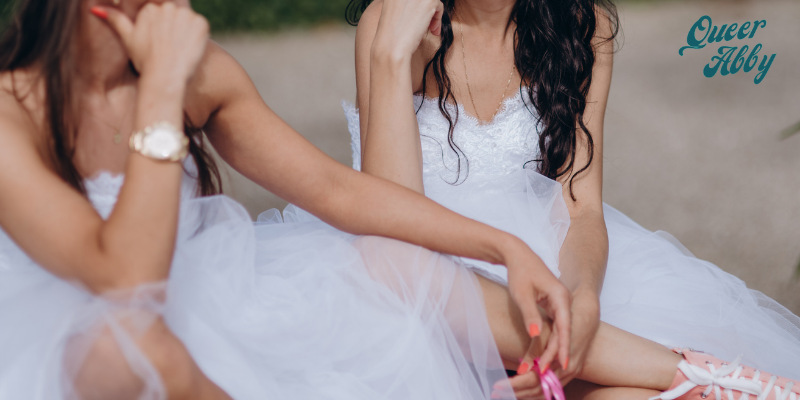 I took a multi-pronged approach to becoming a sexually confident goddess... or at least “not a prune.” Again, this is what worked for me. (Results may vary and I recognize that not everyone experiences sexual attraction or arousal.)

One final, game-changing piece for me came in the form of an inconspicuous piece of waterproof, body-safe and butter-soft silicone from a woman-owned company called Bombex. I had a partner introduce me to the power of vibrators… something that I didn’t think needed to be a part of my sexual exploration journey, and yet has proven to be an important missing link.

(My face is turning red now. Is yours? It’s okay. We’re almost there).

Perhaps what these tools were able to teach me, in the comfort and privacy of my own space, is that I was not at all broken. I just had a lot of mental and emotional layers to work through, most of which did not yet feel safe or comfortable for me to unpack in the presence of another. This was my own journey and I had to be able to let expectations and performance fall away.

Perhaps the biggest takeaway was that sex should not be outcome driven. It’s more about the journey than the destination and I had to work on my own comfort with driving a Vulva with a Bombex in the passenger seat. (Sorry, Volvo owners. You may never be able to look at your vehicle the same way again). 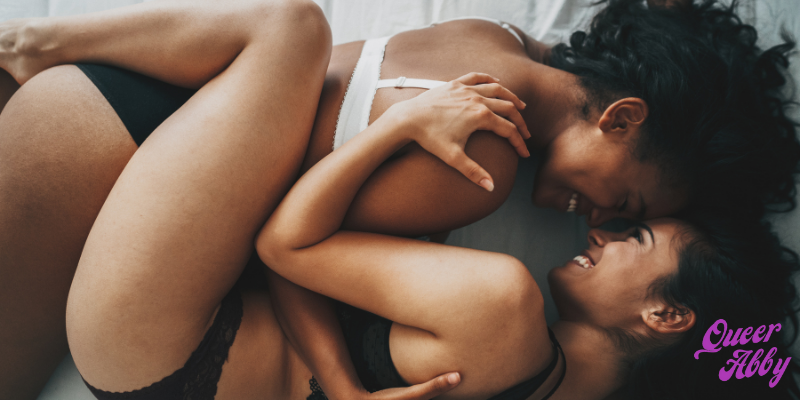 Orgasms are great and have many potential benefits… aside from the obvious:

But more… nay… MOST importantly: An orgasm should not be the goal of sex. Because if there’s one thing I’ve recently learned from reading Brene Brown’s Rising Strong, it’s that expectation can lead to disappointment, and disappointment can lead to resentment.

None of that belongs in the bedroom.

Our journeys to better sexual health and wellness are our own, but we can enjoy the experience more by utilizing help along the way. Like from a magical butterfly, for example. And if you’ve been waiting for permission to do so… this is it, baby!  (And you'll get a discount on your purchase if you use my top secret coupon code XEZQ14Q2BA). 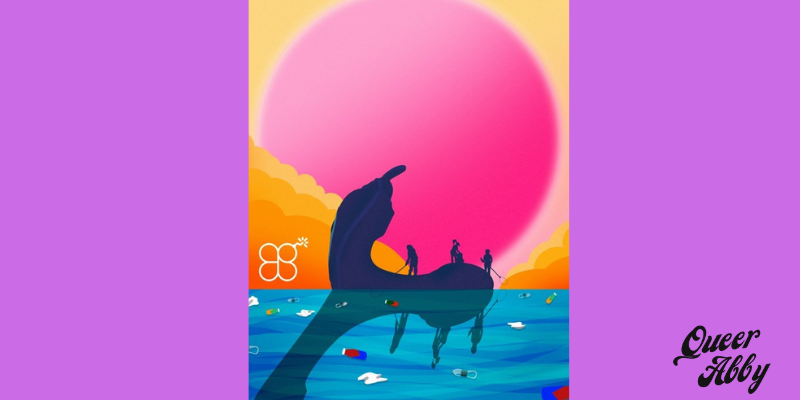 An Epilogue on Why I Support Bombex

Bombex is a woman/mom-founded brand “where we can unapologetically be our authentic selves.” They are all about supporting women, self-love, and dedication to human rights (including the rights and needs of the LGBTQ+ community). Their butterfly shaped logo and product serve as a symbol of “freedom, transformation, rebirth, and goddess.”

In addition, their products are made with soft, waterproof (*think pool, shower, etc) body-safe silicone. Most have magnetic USB charging and some come with remote control options as well. (If you can’t figure out why you would want a remote, I’m sure your partner could come up with some fun ideas.)

Will I make a small cut if you buy a product from them using my link? Absolutely. So, if my next blog post comes from a swanky hotel in paradise, you’ll know how I got there!

Comment below and share your experience or favorite resources. Check out my TikTok channel (@AskQueerAbby) for more videos on being a #latebloomer and the coming out process. And if you'd like more musings and stories to your inbox, signup for my semi-infrequent newsletter!